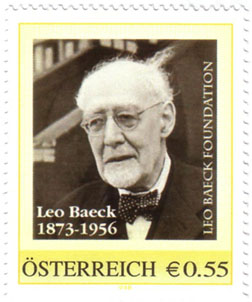 Whatever happened to Leo Baeck?

In his introduction to Leo Baeck’s (out of print) God and Man in Judaism, Leonard G. Montefiore wrote, “Baeck is never easy reading.”

I don’t know why he said this. If he meant that Baeck is not easy to understand, he is wrong, for I understood him clearly when I was an intellectually flabby twenty-one year old. If he means that Baeck is intimidating, then he is right.

I was certainly not used to reading anything particularly difficult at the time I pulled Judaism and Christianity off the shelf at Lamont Library. I was on the third floor, if memory serves–but it’s hard to tell with Lamont because of its staggered architectural design. It could have been the lower fourth floor or the higher second. In any case, I found Leo Baeck in my junior year at Harvard, over 24 years ago, one evening when I wasn’t particularly in the mood to read another tedious passage from The Pioneers by James Fenimore Cooper for English 171. I looked over at the stack and saw the collection of essays by Baeck. At the time, I was smitten with a Jewish girl I had met in class, and anything to do with her background aroused my attention (or distraction). I leaned over and pulled out the book.

It is long since out of print. The copy I now have the pleasure of re-reading at home was the fruit of a three-year search by a North Carolina book-dealer whom I commissioned back in the late 80s from time to time to locate the masterpieces of Baeck, and others such as Christopher Dawson, Etienne Gilson, and Josef Pieper. This is how I managed to collect most of my Baeck books.

Last November marked the 50th anniversary since the rabbi’s death. He was eighty-three years old.

I know nothing of the hardships he endured; his internment in the concentration camp at Theresienstadt; his lifelong service to the Jews in Germany, before Hitler destroyed them; or his status as their intellectual leader.

What I do know is that his words were the first to arouse my sense of religious honor. There’s no other way to put it. There is an undilutable strain of masculinity that runs through Judaism and Christianity–and it was meant to summon men to a sense of themselves, to a sense of the masculinity of the law, and the masculinity of fulfilling it. Baeck’s writing brought that home to me in a way that –up till that time—no Christian writer had. (Chesterton and Knox were still in my future.)

That is what happened to me when I opened the cover of Baeck’s book. I heard someone remind me what my long-neglected duty was. The fact that I was a Christian made his words even more impressive, for I was full of doubts at the time. In retrospect I would say that I was intellectually unexercised, untested. A flabby cradle-Catholic whose deepest acquaintance with theology up to that time was C.S. Lewis’ Screwtape Letters. Much as I like Lewis, that doesn’t say much for my spiritual formation.

The words of Leo Baeck tested me. And they still do. He had sharp, critical words for the dangerous tendency of religion—particularly Christian religion—to lapse into romantic passivity in the face of the world’s challenge. He didn’t have to add that just one of those dangerous times of passivity was during the Holocaust.

In his prime, Baeck became known for a single book, Das Wesens des Judentums, The Essence of Judaism. It was written in answer to a trendy book (trendy at the end of the 19th century anyway) called The Essence of Christianity by Adolph Harnack, translated into English as What is Christianity?, and at the risk of sounding flip, I must say that one is tempted to retort, Not much, if Harnack’s interpretation is to be taken seriously.

Baeck did take it seriously, and he answered for Judaism with his book, which first appeared in 1922. I still have that and copies of his other books on my shelves, which I enjoy re-reading when I feel the spiritual well running a bit dry in my soul.

If you’re wondering why I haven’t linked to any of his books on Amazon, here’s the reason. Unbelievably, the man’s work is just not to be found. Search on Amazon and all you’ll find are out-of-print versions. Forget Barnes & Noble and Borders. You can still find Martin Buber in the Judaica sections there, but not Baeck. It is beyond my comprehension why Leo Baeck’s work is no longer in print. Not even in reprints from the Institute in New York that bears his name, apparently.

What does it say about the climate today that a Catholic wonders out loud on his blog… whatever happened to the wisdom of this man, this rabbi, this saint?