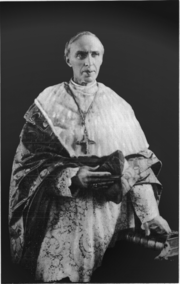 I didn’t have time to write much about the fascinating life of Cardinal Mercier for my book. But the man’s role in inspiring Lemaitre to study relativity is crucial.

Example: Infoplease writes:
Mercier, Désiré Joseph: 1851–1926, Belgian churchman, cardinal of the Roman Catholic Church. He was ordained in 1874 and eight years later became professor of philosophy at the Univ. of Louvain, where, under the auspices of Pope Leo XIII, he organized an institute for the study of the teachings of St. Thomas Aquinas.

He became a foremost leader in the 20th-century revival of interest in Thomistic scholasticism and in its integration with modern developments. He was made archbishop of Malines (1906) and cardinal (1907). Cardinal Mercier worked to secure greater cooperation between the Catholic clergy and the laity and to promote social well-being.

In World War I, Cardinal Mercier became the spokesman of Belgian opposition to the German occupation, for which the Germans placed him under house arrest.

Now…what’s interesting is that Mercier created an intitute for the study of Thomas Aquinas. Pope Leo appreciated this… as he obviously appreciated science in a way that is hard to find among the current crop of cardinals.

Is it a coincidence that Mercier is the man who recognized Lemaitre’s mathematical talent and urged the young seminarian to study Einstein (and also that engineering–especially as it related to the family coal mining industry–was a waste of his talent)?

All of which makes me wonder–why? Why was Mercier attuned to Einstein? Had they ever met? Or perhaps, is it possible Mercier himself was an excellent student of mathematics and always felt its allure?

What is certain is that such an inspiration–such a meddling, if you will–to the degree of urging a seminarian to pursue the study of a hot topic in science… seems as likely to happen in the culture of today’s religious training as it is likely for pigs to fly.

Put another way: Can you imagine a Cardinal pulling aside a brilliant biology PhD candidate and telling him, “Don’t waste your time on Intelligent Design. It’s a dead end. Look into Evo Devo. It’s the cutting edge. More worthy of your talent.”

Can you imagine that happening today?