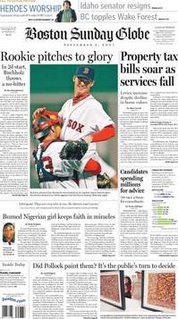 What a great way to start September!

Fifteen days after making his major league debut against the Angels in the first game of a day-night doubleheader, a day that began with manager Terry Francona telling a sleepy morning assemblage of reporters that “[it] doesn’t matter if he throws a no-hitter, he’s going back down,” 23-year-old Clay D. Buchholz made Francona an accidental prophet of sorts with the 17th no-hitter in franchise history and 20th by a rookie in major league history in a 10-0 win over the Orioles.

“I think that’s about as nervous and excited as a lot of us have been in a long time,” said Francona, who could have been speaking for the sellout crowd of 36,819 that made the rafters of old Fens vibrate with sound while Buchholz’s teammates hung on the dugout railing until umpire Joe West signaled that the 115th pitch from Buchholz, a backup curveball, was strike three on Markakis.