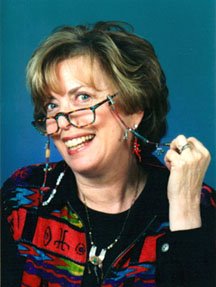 Finding an Edge Part Two
I wrote in the first part about the challenges facing the publishing industry in the current economic recession, one that is likely to cause longer lasting problems for writers than previous downturns. (Speaking of which, Pat Holt has a good post on one editor’s response to her earlier blogging about the decline of good book marketing.) It’s not just a question of how authors with books out there in a crowded (and shrinking) marketplace promote their work…at least for me, it’s also a question of how to get the increasingly distracted attention of editors for new book proposals.

And that’s where video comes in. Book trailers are nothing really new. With the advent of Youtube, many authors, including yours truly, have broken out the camcorder and fired up iMovie or MovieMaker to do our own.

But Vicki Cobb (pictured above), a veteran author of science books for kids, found a more immediate need to create her own videos: using video to reach schools she couldn’t otherwise travel to herself. Vicki wants more than an audience for her books. She wants to help teach kids science right in the classroom.

I contacted her to find out a little about her background —how she started writing science books for kids, and how she got into video.

“I was a science teacher with a masters degree in secondary school science,” she told me. “Many years ago, when I was expecting my first child, I looked around at ways I could make money at home while being a mom. There was an ad in the New York Times for teachers to write educational materials. I figured if I could talk about science I could write about it. And the rest, as they say….is history. That son is now grown and the father of two girls eighteen and fourteen…. I’ve been doing this a long time.”

Did she see video right away as a means of expanding the appeal and market for her books (growing her audience)—or more as a supplement to her existing content? For Vicki, it was more the latter.

“I’ve worked off and on in video. In the early seventies I had my own science show for kids, one of the first three shows ever syndicated nationally over cable television, which was in its infancy. I later worked as one of the original staff writers for Good Morning America.

“I think visually. I had long thought that the tricks now published in We Dare You! would be great TV but no one bought the rights. When I knew that this book would be published, I also knew that the technology was at a point where I could make videos myself. Also, the popularity of You Tube indicated that it would be an added plus to get readers involved in the project.”

One concern caused by the economic downturn, however, is now many schools who once could afford to invite Vicki directly to speak to kids, can no longer afford to do so. The solution?

Video conferencing. Vicki set up her own conferencing system at her home workstation to conference herself into kids classrooms–at no cost to the school.

“I use the PVX software from Polycom. The protocol for videoconferencing is H.323 (whatever that means). I’ve been working with Heidi Culp, the librarian at Honey Brook Elementary in Honey Brook Pennsylvania.”

This new video at her site, Lite Detector, is an example. “I actually directed remotely with video conferencing and [this] week I’ll be directing some kids in Missouri. I didn’t realize I could direct until I actually tried it!”

“My ultimate goal is a multi-media approach to the teaching of science. The fun is communicated through the video and the science behind it is in the book.” Getting kids more involved in science.

Of course, it’s one thing to think about using video to promote books like other authors. It’s another thing to teach yourself. Vicki told me the most difficult thing for her was figuring out how to convert to Flash from QuickTime on the Mac.

“I found a program I liked but the company was suddenly out of business when I tried to purchase [the software]. So, I create my movies on my Mac, then move the .mov file over to my PC on my Thumb Drive. Then convert it using Flash Studio 2, then use Dreamweaver to put it on my site. It’s very tedious and cumbersome, but my new, dual processer PC makes everything a lot quicker.”

To learn more about Vicki Cobb and her science books, visit her site.