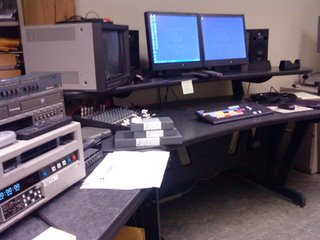 The Return to Avid Xpress
My company recently inherited two 3-year-old Avid Xpress workstations, and over the past couple of weeks, I’ve been re-aquainting myself with them. Primarily they are set up to work from old BetaSP tapes and DVCam tapes from ABC as well as other media companies (we’re supposed to be getting footage from UPI and other news outlets as well).

Until recently my rather costly habit has been to immediately run out and spill $30 or more on whatever QuickStart Guide or other manual I could find to get up to speed on new systems. But every day I sit down at my desk I stare at about a dozen manuals that I realize I never really used. That adds up to a few hundred bucks.

So rather than buy another manual, I went to Lynda.com, which I’d heard about on one of the Creative Cow forums a few months back. You can pick up a lot from just about any program you can think of, and do it right at your desktop at your own pace. Just $25 per month, and you can quit any time: no minimum subscription time. They only have one tutorial on Avid Xpress, but it’s been enough to save me a lot of headaches, considering the deadlines I’m under.

So rather than spill more bucks on more manuals, I think I’ll spend the next few months getting back up to speed on some of the other Video programs I’ve been meaning to explore.