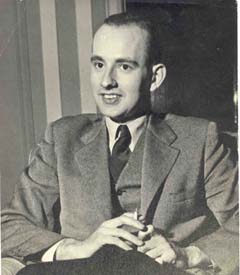 10 Years Ago Today…
Professor William Alfred, who probably influenced me more than any other teacher I’ve had, passed away on May 20th. This small clip is from an evening of poetry he hosted at Harvard’s Memorial Hall, with Stockard Channging and Bill Murray. Tommy Lee Jones was also one of his famous pupils, and it may be just a coincidence I saw him at Fenway Park tonight. Perhaps he is in town for a memorial service or other gathering for Bill Alfred.

There’s a nice bio of Bill at Brooklyn College’s Collection:

During his long years of association with Harvard University, Alfred developed close relationships with colleagues such as Elizabeth Bishop, Seamus Heaney, Mason Hammond, Robert Lowell, Archibald MacLeish, and many others. However, Alfred also made friends outside of his coterie at Harvard. He developed a close relationship and corresponded frequently with Robert Lowell, Lillian Hellman, Lillian Ross, and Faye Dunaway.

As a student, Alfred had taken a creative writing course with MacLeish, and wrote Agamemnon, a modern-day version of the Aeschylus tragedy, published in 1954. His most famous play, Hogan’s Goat, was begun in 1956 while he was living in London on the money he had been awarded for the Amy Lowell Traveling Poetry Fellowship. Alfred, when queried as to why he preferred to write plays, admitted that he ” … didn’t have the patience to write novels … verse is an easy measure to build up a scene with.” He said verse drama “provided a sense of heightened tempo … I had more control of timing.” Alfred’s in-depth research was obvious in his plays. Archibald MacLeish advised him that “the fellow who wants his play to stand up in front of all types of audiences everywhere must take the time and the patience to do a complete file on every character he intends to use.”

Alfred began as a medievalist scholar at Harvard and went on to teach English Literature, drama, poetry, and screenwriting. His class on Beowulf was legendary. Alfred was known to generations of students simply as professor. Not only was he an excellent educator but he mentored an untold number of students. He had the ability to develop a special rapport with each and every one. “Alfred befriended more Harvard undergraduates than any teacher in the school’s history,” said Robert Brustein, director of The American Repertory Theatre at Yale.

And my classmate Rex Dean put together this nice video trubute to him.