More than halfway into Margot Singer’s engrossing novel Underground Fugue, her main character Esther, a middle aged American woman who has returned to London to look after her dying mother, recalls the circumstances surrounding a one night stand she had before she was married.

Just once, she’d hooked up with a stranger. Reckless, yes. She was a few years out of college, on the shuttle, flying back from Boston to LaGuardia on the last flight of the night. Boarding, she’d caught his eye as he passed her going down the aisle. He was very good looking, with thick hair and gray eyes and finely cut features–pretty, almost, as a girl. She felt his good looks like a punch, a shock of raw desire. He took a seat a couple of rows behind her. She swiveled around, pretending to look for someone else, caught his eye, turned back. After a little while, she turned around again.

Singer’s book is full of these disarmingly common but evocative scenes, each always eliciting a pang for the reader, precisely because they’re so familiar even when they veer off into uncharted territory.

Her novel explores the four lives of London neighbors leading up to the terrorist bombings of July 7th, 2005. 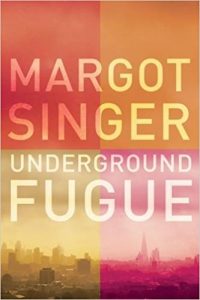 In its beautiful depth, however, the novel is actually an immersion into the web of the inner lives of each character: Esther, her dying mother Lonia, her next door neighbor Javad, an Iranian born clinician getting over his own failed marriage, and finally his college age son Amir who likes to disappear in the late evenings to explore the ripening holes in London’s sprawling infrastructure with his friends.

And it is Amir who will draw them all together in the maelstrom of events surrounding the suicide bombings.

I don’t think I’m giving anything away by reporting that Amir is not involved in the bombings. He becomes a suspect, and is arrested by the authorities because of his nocturnal archeological activities–but the circumstance allows Singer to explore the suspiciousness that haunts even our closest neighbors in these days of seemingly endless wars and refugees.

And in spite of the closeness to our current events, as the dream life of the dying Lonia illustrates, her own childhood was marked by the events of the world at war then. And the shadows surround her, even in the present day:

Her husband, Isaac, had been lucky–a swift blow to the heart and that was it. Well, at least she has survived. She has raised their daughter, lived out her life. She had done her best. Now it is time.

“I am ready,” she says to Isaac, wherever he is. Lately she has felt that he is closer. She often senses the shadowy presence of other people here in the room with her, fleeting as bats at night. She knows it is some sort of hallucination–a sign that her mind is going, in all likelihood–but to her surprise it doesn’t frighten her. Rather it gives her a kind of comfort to think that Isaac is here with her now. Sometimes her brother Hugo and her father are there as well. The lost, returned at last.

To me, Singer’s style is reminiscent of William Trevor in at least two of his greatest novels, Silence in the Garden, and the more ominous Felicia’s Journey.