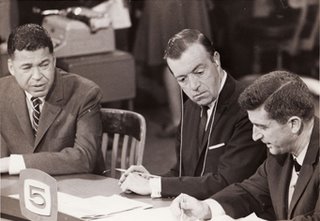 Apopos the story today that Barbara Walters, promoting her new book, told Oprah that she had an affair with former U.S. Senator Edward Brooke (the first African American senator and a Republican one at that), I went back to the archives to find this shot of my father (right) interviewing him (left) on Channel 5 back in the mid 1960s when the Boston Herald Traveler also owned the then WHDH-TV station.

I recall my dad telling me Brooke was (is) a good man (and a good source), and Brooke factors in his (as yet) unpublished memoirs.

Maybe it’s because I’m old, but my first reaction was: “I knew that.” It sounded very familiar to me when we talked about it on “Beat the Press” yesterday on WGBH-TV (Channel 2). When I started searching, I found this line from a March 5, 2000, Globe profile of Brooke by staff writer Sally Jacobs: “A regular at the lavish parties at the Iranian Embassy, he did the hustle with Elizabeth Taylor and squired Barbara Walters about town.”

Walters has dated Alexis Lichine, the wine expert who was once married to Arlene Dahl. She used to count among her friends former Sen. Ed Brooke and Secretary General of the Organization of American States Alex Orfila. Both Brooke and Orfila are married now and, for some years, Walters’ closest friend has been Alan Greenspan, the financial wizard.

Do we not understand the plain meaning of this? Especially that Brooke became a “former” friend of Walters after he got married?