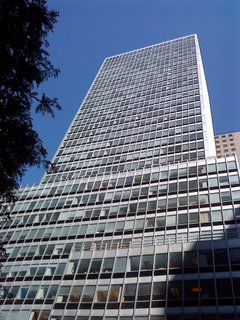 Spent the day down in New York at both the CBS archives and BBC America (pictured left), to discuss licensing of news and documentary footage for my company. CBS has news reel going back to the 1940s, as well as Kinescope of live programs from the 1950s and 60s. They’re currently (like me!) converting 3/4-inch Umatic footage to digital. I still have two decks that work, and tapes I have dating back to the 1970s (see my Video Archive) still play. But it was nevertheless disquieting to think how little support the old format has. Sony has long since stopped supplying parts. CBS has its own internal engineers to clean, maintain, and salvage parts from other decks to keep the Sony Umatics working.

Makes me feel even more protective of my own decks. And I’m a little sentimental about Umatic since 3/4 was the first format in which I professionally trained and shot productions.