Publisher’s Weekly reports that print sales are up in June.

With all categories except adult nonfiction posting increases, unit sales of print books rose 5.6% in the week ended June 13, 2020, over the comparable week last year, at outlets that report to NPD BookScan. The YA categories had solid gains, with nonfiction sales jumping 34.1% over the week ended June 15, 2019, and fiction sales up 21.4%. The latter category benefited from the continued strong sales of The Ballad of Snakes and Songbirds by Suzanne Collins, which was the top book in the week overall, selling almost 70,000 copies. In YA nonfiction, This Book Is Anti-racist by Tiff any Jewell sold nearly 6,000 copies, making it #1 on the category list. Unit sales rose 19.2% in the juvenile nonfiction category over 2019. A new release, Discovery: Animals All Around by Courtney Acampora, sold about 6,000 copies, putting it close to the top on the category list. Summer Bridge Activities workbooks published by Carson Dellaso took the #4–#11 bestseller spots on the list, selling about 81,000 copies total. Sales of adult fiction rose 6.3% in the week, with good performances by new releases from James Patterson and Danielle Steel; The Summer House (by Patterson, with Brendan DuBois) sold nearly 26,000 copies, and Steel’s Daddy’s Girlsold more than 22,000 copies. Sales slipped 2.3% in adult nonfiction despite strong sales of So You Want to Talk About Race by Ijeoma Oluo, which sold more than 57,000 copies, and White Fragility by Robin Diangelo, which sold more than 54,000 copies. A new release, Countdown 1945 by Chris Wallace, sold about 45,000 copies in its debut week. 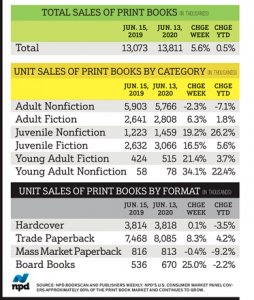 I just finished Oluo’s book and it was superb. I don’t know about elsewhere, but in the Boston area at least one bookstore, Brookline Booksmith, is cautiously re-opening.