Four years ago Catholic apologist Mark P. Shea got fired from the National Catholic Register (along with fellow journalist and blogger Simcha Fisher) for repeatedly telling Catholics who supported Trump that ‘this emperor has no clothes’ (and also wondering what the hell is wrong with people).

Over the past four years of Trump, he’s certainly had plenty of reasons to broadcast Schadenfreude–but instead he diligently went to work on a much needed book explaining the long tradition of Catholic social teaching which too many U.S. Catholics on the Right either don’t want to acknowledge or truly do not understand. 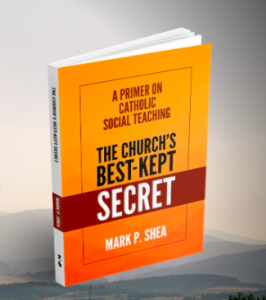 Shea’s book launches with an overview of the Church’s fundamental teaching about the dignity of human beings, the fundamental ground from which pretty much all of the Church’s social teaching follows, for example: support for the rights of workers’, support for social programs that protect families and children and the destitute, the sacredness of life from the womb to the grave, a longstanding critical attitude toward unregulated capitalism, and especially the Church’s critique of the hyper individualism and libertarianism that has infected conservative American Catholicism–from EWTN to the heavily funded Napa Institute to Opus Dei’s ‘Catholic Information Center’ in Washington DC, and on and on. It’s extraordinary how many of the folks at these institutions turn apoplectic on social media whenever Pope Francis makes the slightest criticism of capitalism and consumerism.

I want to focus on one section from Shea’s book in particular, from Chapter 7, ‘On Solidarity’–which beautifully outlines the Church’s insistence on support for the state–precisely where Catholic fans of National Review, The Wall Street Journal, First Things, and Fox News are most in need of reminding.

Or, as Shea describes it: What We Owe Each Other.

Some think that we can live in a stateless society of pure individualism.  But this simply is not so.  By our very nature, we are born into a world where it is our glad burden to owe debts to God and to our fellow human beings that we can never repay.  We owe God an unpayable debt for literally everything.  But we also owe our family, our country, our civilization, and the entire human race for a colossal bounty of gifts.  They gave us food, clothing, shelter, education, language, Shakespeare, fishing, physics, a million recipes, Star Wars, the Beatles, Homer, the Bible, bubble gum, pencils, penicillin, aspirin, automobiles, indoor plumbing and a billion other things we could never have thought of, much less created on our own.  We depend on others—and on the organizing power of the state—for a host of things. Therefore, we owe those people—and the state—a debt not of charity but of justice, to help advance the work we do in common for the good of all. That is why Scripture describes taxes, not as “theft” but as something we do, in fact, owe(see Romans 13:7). Why?

Because our freeway system was not built and is not maintained by small bands of local citizens patching potholes on Saturday afternoon. The state does that.

Because an educated population of millions did not just happen.  They went through school systems that were largely the creation of the state.

Because when a despot like Hitler declared war, he was not met by some volunteers who grabbed their pistols and headed across the Atlantic in a dinghy to land at Normandy. The state made it possible to defeat Nazi Germany.

Because when Ebola was raging, the cure was not found by one plucky guy with his chemistry set, but by a vast coordinated effort of states and private actors.

Of course, being human creations, no state system is flawless. Nevertheless, St. Paul understood the state to be so vital in forming a more perfect union, establishing justice, ensuring domestic tranquility, providing for the common defense, promoting the general welfare and securing the blessings of liberty to ourselves and our posterity—that is, to maintaining the Common Good—that he told the Church that state authorities“are ministers of God” (Romans 13:6).

If you’re a Catholic who’s been suckered by the Republican Party into believing you have to vote for Trump because the GOP is ‘pro life’ or because the Democrats will turn the entire country socialist, order a copy of The Church’s Best Kept Secret.